The youngsters were this week’s top performers for Ilkley Cycling Club. With four riders in the British Schools Cycling Association Regional Circuit Race Championships held at the Brownlee Centre, ICC came away with two silver medals. Joe Turnbull continued his good run of form with second place in the U13 event and Toby Garrido (pictured) picked up silver in the U7s, backed up by Ben Garrido in 9th and James Russell in 10th. 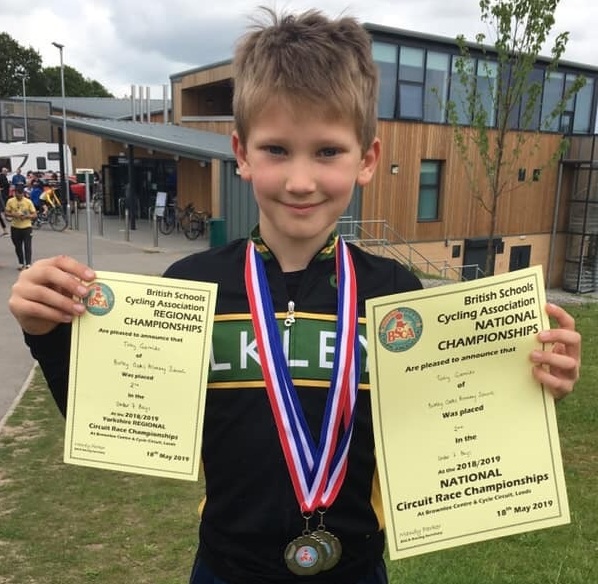 Meanwhile , Ilkley Cycling Club’s best ranked road racer , Tom Garnett, picked up licence points in two events with 13th place at the East Lancs Road Race on the tricky Bashall Eaves circuit near Clitheroe and a 10th place in the Elite/1/2/3 cat CDPP circuit race at Colne. Also at the CDPP event, in the supporting 3/4 cat race, Neil Rollins also scored a licence point with 10th place and Michael Strange was 17th after a brief diversion onto the grass to avoid crashing.

In time trialling, Dave Leckenby was also in the prizes for ICC. At the Selby CC 10mile time trial his time of 22mins44secs gave him first v50 placing.

On Tuesday evening, ICC was treated to another evening of great weather for the second event of Simon Warren’s evening time trial series. Doug Hart and Jake Unsworth have paired up on a tandem with a view to future record breaking and this was their first outing officially against the clock as their training programme gets underway. They returned to the timekeeper with a speedy 23mins38secs, showing that they are co-ordinating well. Hopefully the racing tandem will hold up to the massive combined power that these two big guys are going to be subjecting it to.

Whilst in the actual, solo, race the winner was regular visiting rider Andrew Johnstone from Airedale Olympic with a fine 25m36s. On such a nice night for weather there were plenty of great performances which riders will have to work hard to beat as the season progresses. Rest of results: