Wet greasy conditions faced the competitors in Sundays 3rd race of the Yorkshire Winter Cross series held by Skipton CC at Aireville Park. The course made the most of the Pitch and Putt hill, with competitors going up and down it several times each lap in a true test of fitness and bike handling skills.

There was a great turnout of Ilkley CC youth riders and great to see some new members racing and doing well. In the under 8’s ICC had Jake Thornton (5th) and Finn Sharp (8th), U10’s Lucy Christensen (4th) and Rosa Wilson (5th), U12 Alfie Robinson (11th), Theo Hart (14th), Zac Wilson(27th), every rider tried really hard and it is important to reminder there is a 2 year difference across the age category.

No Club jerseys in the U14/16 but lots of Club members who are representing teams, so lots of Ilkley CC friends to shout for, with good performances for Ben Houlihan, Joe Turnbull and Alex Beldon. An absolute stellar performance from Freya Whiteside who won the U16 girls in great style.

Do you have a child who likes to ride a bike and would be interested in trying cyclocross, or just how to access cycling generally? If you want to know more about the Club and what it can offer send us an email.

In the mature categories, Ilkley CC had Tony Limbert 10th in the V60 race and John Wood 12th in the V50. The five riders in the V40 race were led by Dave Wilby in 6th followed by Arthur Wilson, 9th, Andrew Whiteside, 16th, Liam Rees 38th and Steven Butts 40th. Finally in the senior event, Ilkley CC’s coach Dan Sharpe was a fine 17th followed closely by Michael Strange in 19th place. 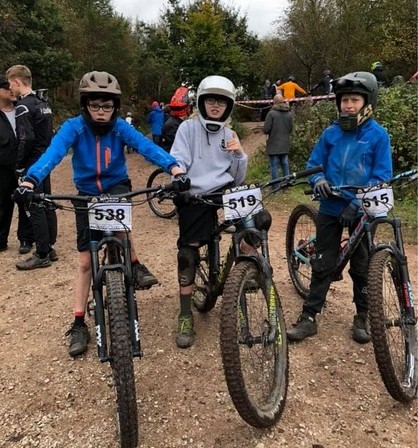 Harvey Wilson, Harry Thorpe and James Stirling competed in their first downhill mtb race this weekend on a fast and technical course at Cannock Chase. All the lads raced hard but special mention for Harry Thorpe who finished 7th in his age category. Not bad for his first race! James came 18th and Harvey 17th. 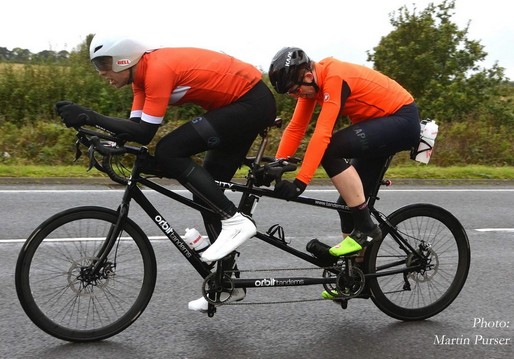 After successfully setting the circuit of the Yorkshire Dales tandem record earlier this year, Doug Hart and Jake Unsworth planned an attempt at the more prestigious York - Edinburgh record. The current 8 hrs 2 minutes having been set by the renowned pair of J Murdoch and G Berwick of Edinburgh RC in 1986.

The record breaking rules allow an attempt to be taken in either direction, and the riders were planning York - Edinburgh on Saturday but watching the weather forecast the wind looked to be shifting and with just 48 hours notice, they decided to change plans and start from Edinburgh and head south to York, whilst pushing back the attempt a day to Sunday. There was a chilly start in Edinburgh in the shadow of The Duke of Wellington’s statue on the corner of Princes Street. The Saltire on the top of the Balmoral hotel ripping (in the right direction) above them. 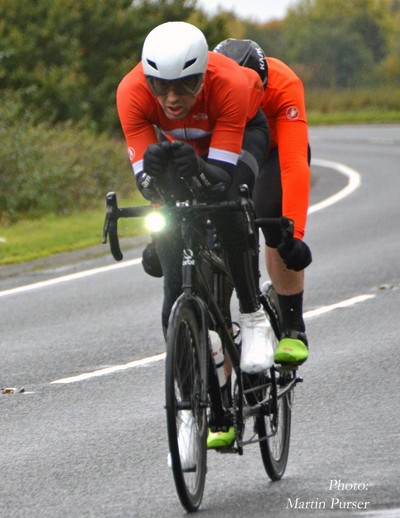 The first few hours, to the border, were cold but quick, dry but certainly not flat. And sure enough as they crested the 1400 feet above sea level Carter Bar and crossed into England it began to rain. They would have to endure the rain for the following hundred miles. What’s more the wind from this point onwards was less helpful.

Nonetheless, Hart and Unsworth reached Newcastle roughly on schedule - with 20 or so minutes in reserve on the record. The Newcastle bypass is not something to be recommended to any geordie on their next cafe ride but a necessary evil to avoid rolling through the centre of the city.

At this point - and on to Darlington - the wind was hardly any help at all. The odd flag by the side of the road showing just how little help the riders were getting.

The roads here were much flatter though and the tandem pair had a sufficient buffer to reach York with 15 minutes to spare, completing the 186.9 mile ride in 7hours 50 mins to set a new record.

The record attempt was supported by JDs Tandems of Gargrave, as was the previous successful Yorkshire Dales record ride. Additional support came from Ilkley Cycling Club, the official timekeeping was done by Yorkshire time trialling stalwart Phil Hurt, and both riders parents performed on ride feeding and provision of warm clothes and champagne at the finish.